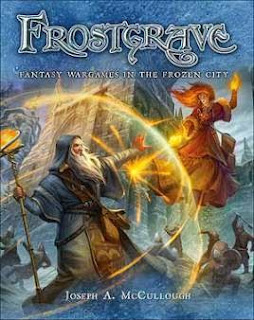 Osprey cooperates with North Star Military Figures in several areas already and now the North Star prepared pre-order deals called Nickstarter, where you can buy all Frostgrave goodies and get some bonus as well. Its important to say that there is no mandatory models to play the game and there are no archetypal fantasy demihuman races as well. Wizzard and specialists models are well sculpted. Nothing like spanish or french school. Classical old-fashined „english“ sculpt.
Plastic henchman model set will be available on the begining of July, now there are only 3-UPS photos available mainly from Salute 2015 show. There are four frames in the plastic set each contains 5 bodies, 10 heads, 25 different hands/weapons, 2 shields, looting accessory. All of them are in winter garb. Plastic models are sculpted by same sculpter as models from Fireforge Games and form are cast by Renedra.

Frostgrave is fantasy skirmish game played in the ruins of the city of Felstad. Felstad was capital of the magic realm, but is fallen now, its ruines under the frost and ice. A lot of wizards are going to visit and loot its ancient libraries,laboratories and wizard shops, no matter the dangers. You can read more about fluff in the anthology Tales of the Frozen City, also by Osprey.
Your main character is wizard and his retinue. The ruins contains a lot of treasure which has to be looted, monsters to be killed and some of the rival tomb riders to be defeated.  Yes there are neutral monsters in the game, so it means it could be possible to play Player Vs Environment game. But thats not confirmed and thats what I am assuming, maybe with some rule tweaks at least. (EDIT: Confirmed meanwhile by playtesters and author, yes there is AI script behind the monsters, it is not intended to go PVE, but it is possible to arrange solo scenarios and minor scenario tweaks) 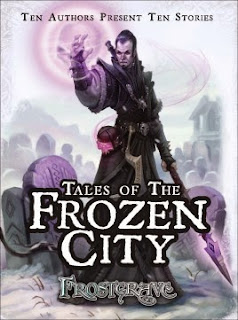 Well for me the mechanics are very important for the game, no matter how good game you have in your hands. If the mechanic does not fit well tha game is screwed. Author feels the same way (see WSS magazine Issue 78). Author says that he likes the old DnD feeling. The system has to be fast (and furious) and funny. Its very important to say that Osprey games are for fun and not for measuring your…lets say ego. No Osprey game is that much competitive, its more about narrative part of the hobby. So to get the old dungeon crawl and hack’n’slash feeling, the author choose the d20 dice as core mechanics.  Now the competitive players are hissing as d20 has very bad bell curve to get acceptable amount of average scores, but thats the fun here. See the classical Dungeons and Dragons explanation – do you feel the blood in your eyes, sweat on you hands, the loose cobblestone on the road? That all has influence on the fate and luck and sklil. So as d20 is not working for rulez heavy, challanging competitive game as Infinity, here is well accepted. As bum on potty (well thats Czech saying: „Jako prdýlka na nočníčku“, not sure what the native speakers are saying).
Anyway you are rolling your d20 adding your skill and compare it with you oponent d20+skill roll. If you win you are happy as you do that much damage as difference between you final attack number and oponents armor. So if you kill the oponent its up to hit points and therefore attack rolls and armor. Weapons than have influence on damage rolls – for example massive two-hander gives +2 to damage… Pretty fast and clean, isn’t it?

The leader MUST BE a wizard. And as you know wizard is never late, he has to choose from 10 different magic schools /and there is 10 different models of masters and apprentices/. Wizard can cast spell from any school, but some goes better, some goes bad. Phil Smith introduced the schools for Sigillist:
Every spell has its own difficulty you need to beat and school will make the changes in the overal difficulty. More complex spells are more difficult. Unfortuantely I did not find any more info about casting the spell so I can only assume that you have to roll d20+skill vs spell dificulty to cast it.
Master and Apprentice are connected, they has to be from same magic school, but the apprentice is optional, if recommended. What the wizard learns, so the apprentice.
There only master and apprentice, the rule of two established  by Darth Bane after learning from the holocrons of Darth Revan…eh. I wander if I can test the rules with Sith vs Jedis…

The wizard knows how to cast spells, but he can't wear armor nor use the  weapons. But he needs some strong arms and sharp swords. For 500 gold coins the wizard shall hire his henchmans from several archetypes. Author of the Frostgrave indtroduced the rules for hiring on his blog, so you can exploit the rules there. Author recommend the apprentice (for 200gc) and than 300 gc for the rest. Henchman survey and plunder the ruins and kill the monsters, so the wizzard shall drink his tea, but he needs to have enough hands to carry the treasury. Even though you can have loyal hound (or snow leopard, or toad), you still need those guys, and author recommends at least 8 of them. By the way The Companions of the Hall from famous Icewind Dale books led by Elminster or Cadderly with apprentice are nice group of 6 henchman and 10 points will left: Drizzt the Tracker 80Gc, Catti the Archer 50Gc, Wulfgar the Infantryman 50Gc, Regis the Thief 20Gc, Guenhwyvar the Hound 10Gc, Bruenor the Man At Arms 80Gc.

The game is most probably designed for narrative based game, with strong campaign ruleset. There has to be 10 scenarios in the base book and campaign source book Thaw of the Lich Lord is planned for november 2015. Master and Apprentice are gaining experience and levels by dungeoncrawling and they can improve the henchman as well. As per playetesters and Joseph A. McCullough, there is no problém to introduce a new player into running campaign and if master die, the apprentice will become a new master… So as I said before its going back to RPG and Wargaming roots, where RPG were basicaly wargaming with character evolving rules. If you are playing any gamistic RPG (rulez-heavy ones) like Pathfinder (me, me, me), thats the simple way how to simplify the thing. 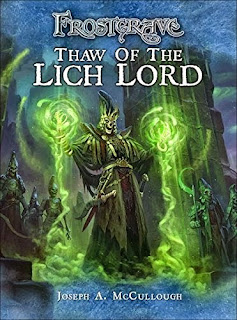 I don’t have the rules now, and I have already started thinking about tweaks, additional rules and archetypes, so I am looking forward to start playing that. I have already purchased Level 1 Nickstarter and I am going to improve my commitment there…

Also I have to thanks to Joseph and Phil for their extraordinary support through Lead Adventures forum.